View source
watch 02:05
Wiki Targeted (Games)
Do you like this video?
Play Sound

The kingdom is the overall area that your governor can have direct influence over and also the area to which your movement is restricted. Sometimes called the map, the kingdom is approximately 1200 km x 1200 km in size, square, and bordered on all four sides by impassible mountains. Initially, it is covered in fog, with one fog block covering 3x3km. Kingdoms each have a distinct name and kingdom number (e.g., Kingdom of Galloway, #1001).

Eight kingdoms comprise each Continent, arranged in a square pattern, with a 9th center kingdom which is currently un-populated and unreachable. Other kingdoms and continents can be viewed by zooming all the way out of the map, then clicking the globe icon in the bottom right-hand corner of the screen.

Map of the Kingdom

Each kingdom is randomly generated so no two kingdoms will be exactly alike, however, they all share a general shape and have several characteristics in common. Mountain ranges are the common article 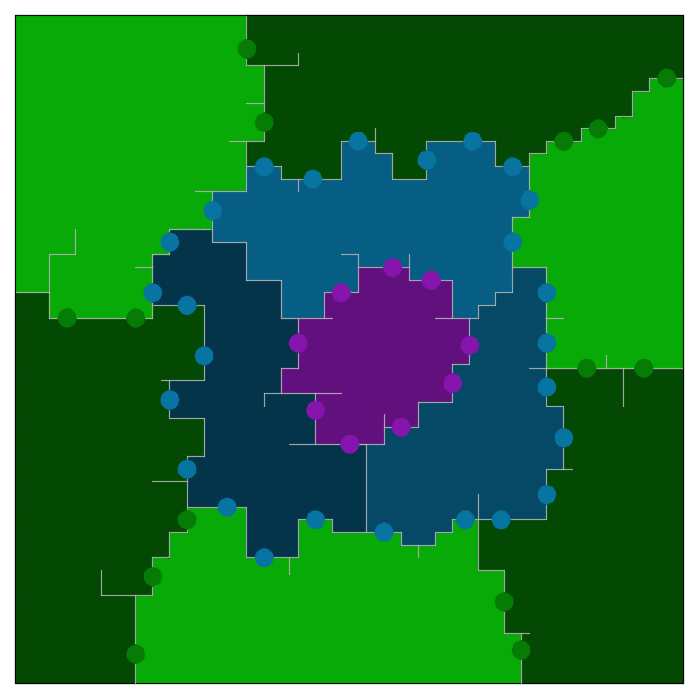 In the map above, several areas are indicated:

Tier 2 areas are always located in a shape around the center of the kingdom, in which the Tier 3 area is always in the exact center.

When the city is founded, it will spawn randomly in a Tier 1 area in the outer rim of the kingdom. Six of these areas exist, unofficially referred to as such because they are separated from each other by Tier 1 passes. All Tier 1 areas can be accessed freely by all governors until 24 hours after the Rising of Heroes event in the kingdom timeline has completed, after which time alliances may capture the Tier 1 passes to restrict movement into and out of their area.

Tier 2 areas are unlocked 24 hours after the Wild Competition event in the kingdom timeline. To enter a Tier 2 area, your alliance must control a Tier 2 pass connected to the section you wish to access.

Some alliances attempt to bypass this requirement by having the leader temporarily pass leadership to a trusted officer or alt account, leaving the alliance, joining an alliance which controls a Tier 2 pass, using a Targeted Teleport into the Tier 2 area, then quitting that alliance to rejoin the original alliance. Once inside the Tier 2 area, the leader can build a satellite alliance fortress, which will allow alliance members to use a Territorial Teleport to move their city to Tier 2 lands adjacent to the new fortress.

Further, some alliances which do not plan to control a Tier 2 pass long-term will connect their Tier 2 territory to their Tier 1 territory by placing an alliance flag adjacent on both sides of the mountain range separating the areas.

The Tier 3 area is unlocked 24 hours after the One More Step event has completed in the kingdom timeline. To enter a Tier 3 area, your alliance must control a Tier 3 pass.

The Tier 3 area will typically be heavily contested for entry because it is home to the central goal of the game: first control of the Lost Temple. Coalitions of alliances will attempt to exert as much control as possible to prevent contenders from entering this area. As a result, fierce competition and often large-scale wars will break out within this area.

Community content is available under CC-BY-SA unless otherwise noted.